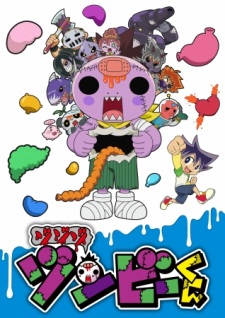 Plot Summary: A gag comedy aimed at young children featuring Zombie-kun, a child zombie, and his interactions with the world. It's not intended to be scary in the slightest, but rather, it focuses on the comical and bizarre things Zombie-kun's body can do, and the common-sense-defying way Zombie-kun behaves. For example, he'll take out his stomach and inflate it with air to use as a pillow, or if he gets wet, he'll detach parts of his body and wring them out like towels, then reattach them with a glue stick. Everything is depicted in a cute, cartoony fashion so as not to be too graphic for kids.