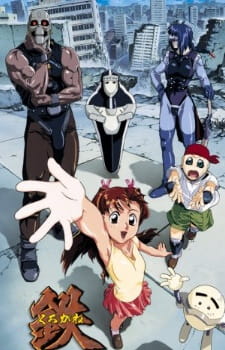 Plot Summary: In the aftermath of a great and terrible war, Haruka finds herself the last surviving human on Earth. Though humanity may have been wiped out, she is not entirely alone. Advanced robots have survived the apocalypse, and Haruka lives with five who care for her: Spike, a boyish android who is very attached to her; Trigger, hot-tempered with a penchant for firearms; Cleric, the intelligent problem solver; Reeves, whose thoughtfulness overshadows his intimidating appearance; and Angela, a sword wielding recluse with an aversion towards humans. Residing in a high-rise building at the center of the city, Haruka lives a relatively peaceful life with her mechanical family. However, her life is far from a stable one. Not only is a lack of resources a concern, but violent, remnant robots from the war roam free, ready to destroy whomever they meet. Kurogane Communication follows Haruka as she tries to survive in an apocalyptic world while facing many dangers that will challenge her daily life.