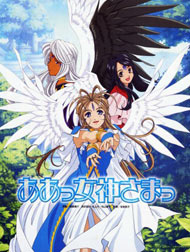 Plot Summary: One year after goddess Belldandy emerged from Keiichi Morisato's mirror and promised to stay with him forever, a new threat to their happiness emerges, one that could end the contract between Belldandy and Keiichi.

Other name: Ah! My Goddess: Sorezore no Tsubasa; ああっ女神さまっ それぞれの翼